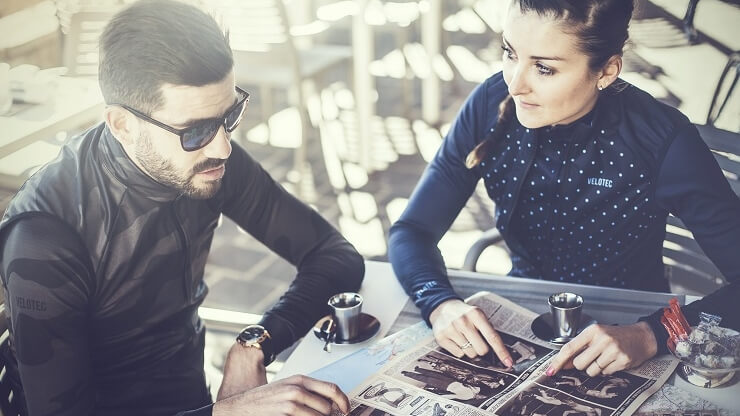 The Velotec Elite gilet is made from a three layer polyester fabric with a water repelling coating, which supposedly blocks chill while encouraging speedy eviction of rider generated coolant, and has a waterproof zipper.

The subtle midnight camouflage effect has a certain something, although I was slightly disappointed by a lack of retro-reflective technology or detailing.

That aside, the cut and fit are ideally suited to speed-orientated mile munching. Our large fitted me perfectly, hugging every contour, but was unrestrictive when alternating between tops and drops, or indeed aerobars. Velotec Elite Camo Waterproof Gilet - side.jpg Since we're on the subject, the lower back offers surprising protection from spray when riding without mudguards. The silicone gripper is similarly unobtrusive and prevents incremental creep.

Large is my default when it comes to jerseys but I'm increasingly compatible with several brands' mediums. It's worth taking a few measurements and double checking if you are proportionally shorter/longer in the torso, or fall between sizes.

By definition, it's not designed to be roomy. There's enough space for the essentials, a long sleeve base and mid layer with fully loaded pockets. There's no hint of drag, or annoying flutter, even at 40mph down a local 1 in 4 and battling an unforgiving, gusty crosswind.

Though it essentially feels like a middleweight jersey, it does an excellent job of blocking icy blasts, although I've always worn a sleeve type garment around my neck to stop chill from sneaking inside.

Adding rain to the equation hasn't foxed it, or dented my morale. Much like any decent water-repelling technical fabric, water simply beads up on the surface, then rolls away. A cheeky blast from my garden hose, aimed directly at the zipper presented no problems either. Talking of which, I'd appreciate a slightly bigger zipper tag but otherwise, it's relatively straightforward to remove mid ride. It'll fold just small enough to stow inside jerseys with deeper pockets, although wedge packs on steroids such as the Altura Aero Post Pack are more dependable hosts.

The Velotec Elite gilet stirs mixed emotions in me. On the plus side, it's a well-made and extremely competent garment, so to that end, good value. It's made in Italy, some price differential has to be expected, over a similar quality garment made in the Far East. That said, I'd like to see some refinement: a poacher pocket and just a smattering of reflective would be top of my list.