Cycling Weekly takes a look at the slickest time trialling attire on the market.

A skinsuit is designed to be the most aerodynamic piece of clothing you can wear. Premium skinsuits feature special fabrics designed to reduce drag and manipulate airflow. Fabrics are strategically placed and seams are also carefully considered. Premium suits are often developed in the wind tunnel.

Aerodynamic drag is the biggest force a cyclist needs to overcome when riding on the flat, and typically 80 per cent of this drag is created by the rider. What you wear is therefore hugely significant. Premium skinsuits claim to offer a significant aerodynamic advantage over more basic, more affordable Lycra suits. We have assembled five leading skinsuits and tested them in a bid to see which is the fastest. As the control we tested a Lycra Santini suit, similar to that used by the leader of the Giro d’italia. This suit doesn’t make use of the special fabrics and optimised placement of those fabrics.

To test the skinsuits we teamed up with Wattshop to perform comparative aero testing at Derby Velodrome in a controlled environment. This has been done in a bid to quantitatively find out which of these suits is the fastest and was completely independent and impartial.

The protocol for the testing was as follows: three different elite riders wore each suit and did controlled runs at 40kph, 45kph, 50kph and 55kph. This was done in a bid to determine a drag/ velocity profile for each suit, as suits can be optimised to perform better at certain speeds. Each rider rode their own personal time trial bike, maintaining a consistent position. The riders — Dan Bigham, Jacob Tipper and Jonny Wale — are all currently national team pursuit champions. Their ability to ride the pursuit line with precision and ride laps at a metronomic pace helped improve the consistency and accuracy of the data obtained.

The Wattshop software is able to interpret the power and speed data for a given run to determine a drag coefficient for each skinsuit at a given speed. The data presented is the average of the three riders at each respective speed. The CDA is the system drag coefficient for the rider and bike; a lower number equates to lower drag. By subtracting the watts required to overcome drivetrain friction and rolling resistance we are left with the watts required to overcome air resistance — ie aero watts. The aero watts and CDA for each respective suit are presented as an average of the test riders’ results.

All the riders who wore the suits were asked to rank them for fit and comfort too. In addition to the aero testing we wore the suits in a number of rides and time trials to see how they feel and perform in real world conditions. Many thanks to Wattshop and Brother NRG cycling team for their assistance. 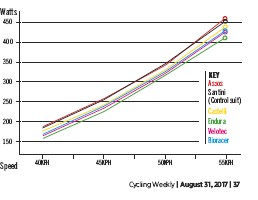 Firstly we should point out that although we have made every effort to control variables and obtain consistent and reliable data, aerodynamic testing is difficult to do and anomalies are possible. A skinsuit can be system dependent. While our data suggested certain suits were universally fast on all our riders (Velotec and Bioracer), other suits were faster or slower depending on who was riding it. A noteable result was the Castelli 3.3, which was within 1-2 watts of the Endura and Bioracer on two of our riders, but over 10 watts slower on the other.

Another observation is that the differences between the premium skinsuits is, on the whole, small — within the region of 1-3 watts. However, the difference between the best performing suits and a basic Lycra suit appears to be very significant. At 50kph, the Bioracer and Endura suits were 25 and 19 watts faster than the Santini respectively.

With respect to drag, the performance of suits at different velocities was rarely linear. In most cases a trend was observed where the lowest CDA was around the 50kph mark. Intended for use by pro riders, this is a sweet spot typically averaged in most time trials. Perhaps there’s a gap in a market for suits for mere mortals that are engineered to be optimal at around 40-45kph.

Comfort should also be factored. If you are doing a long event, then chafing in the wrong place or an uncomfortable chamois could severely impact your ride, probably more than the 5-10 watt saving you maybe getting over a comfier suit.

The results do suggest something interesting. If we use the estimation that at 48kph 1W is equal to 0.1 seconds per kilometre then the outcome of the 2017 Giro d’italia could have been different. According to our test results Nairo Quintana, wearing the leader’s Santini skinsuit instead of his Endura team issue one, was at a huge disadvantage to Tom Dumoulin, who was wearing a Bioracer suit. Dumoulin’s winning margin was only 31 seconds after 70km of individual time trialling.

Overall the premium suits are expensive, but if looked at from a cost-per-watt saving they make far more economical sense than a £5,000 top-end time trial frame. The Velotec is our winner because it combines excellent aerodynamics with a more affordable price.